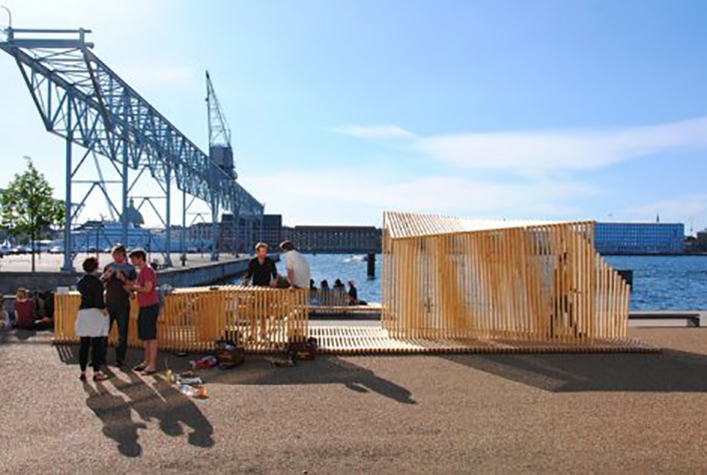 To improve the relationship and knowledge between the students from the different artistic schools around Holmen Campus, two students decided to build a collaborative stage.

The design of the stage uses a simple material (38x57mm pinewood) to construct a bespoke design consisting of a stage with adjustable deck seating, and an elevated platform with two volumes jointed to the platform. The first is a 1m high bar and seating area, and a 2m high sculptural, double-curved wall which has the function of hanging a screen for film screenings, a backdrop to the stage, and a place for performers to stand when off-stage. The joinery is made with custom designed metal hardware that is cut with a laser cutter to provide both a structural support, but also efficiency in construction and de-construction. The stage is at its longest dimension 11m and widest dimension 4.8m. It is also planned that extra accessories such as sun shades and waterproof seating could be purchased for the stage.

Reflections about the interdisciplinary collaboration

“Built by students of the building arts (Arkitektskolen) The project is used by many disciplines. For example, students from the RMC will be using the stage to perform small acoustic concerts. ELF’s summer film club will be using the stage for film screenings. Production Design (Film School/Design School) and Stage design (Theater School) will be involved in both the design process and technical and logistical support. We have been active in publicizing the project at the Holmen Event, and on flat-screen TV’s at the Film School, as well as their intranet, with the help of the administration there.”